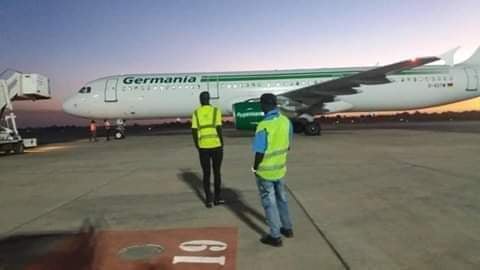 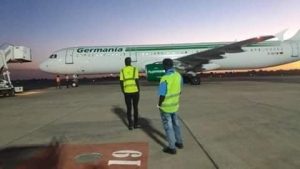 Reports reaching GTTV has it that a flight allegedly carrying migrant deportees from Frankfurt in Germany is due to land at the Banjul International Airport sometimes today November 2nd 2021.

A couple of days ago, we (GTTV) received a call from a Gambian man who is currently detained at a local jail waiting to be airlifted back to The Gambia in the said flight. According to our source who chooses to remain anonymous, he went to renew his documents at the local immigration office in Thuringia and was arrested and detained. He was transferred to a local jail in Krefeld. Krefeld, according to Wikipedia, “is a city in North Rhine-Westphalia, Germany. It is located northwest of Düsseldorf, its center lying just a few kilometers to the west of the river Rhine; the borough of Uerdingen is situated directly on the Rhine.” Wikipedia It is important to note that our source who was calling from the local jail went to Germany through irregular migration locally known as the “backway” 6 years ago. He spent some time in Italy before finally proceeding to Germany where he lived for 4 years. He made several attempts to reach this reporter through direct line call but we were not available for 2 days. When asked to call us on whatsapp, he said “no,no,no,no,no, I don’t have access to whatsapp right now. I’m calling you from the jail. I only have 10 minutes. I told them my mom is sick and I need to make a call”. Said the caller hurriedly. When asked how he got to the jail, he said “I went to change my documents at the immigration and they detained me. I have not committed any crime”. Said the angry caller. He further appealed to this reporter to warn The Gambians in Germany especially those who went through the backway to be very careful. “Please bro, spread the word to the whole world. Tell the boys in Germany especially those who came through the “backway” to be extremely careful. I know I’m a victim but I don’t want any of them to become victims too. So, please tell them to be careful.” Our source stated that so far he has seen 6 Gambians in the same detention Center and none of them has any form of document thatthe Germanauthorities can use to deport them. “Belaye bro. We are coming without passport or anything.” He Echoed before the phone got disconnected. GTTV contacted Ebrima G. Sankareh, the Spokesperson of The Gambia Government to react to the information. According to Mr. Sankareh, “The information is false; the moratorium on returns from any destination still exists as agreed with our European partners.” When further asked if he is aware of any arrangements in place for a Charter flight for deportees, the government Spokesperson said “If the information is false which it is, then how can I be aware of chartered flights to deport? I’ve given you the answer based on my knowledge of the facts and circumstances. If you’re not satisfied, please contact Immigration or Foreign Affairs.” He added The International organization for Migration (IOM) provides reintegration support to migrant returnees including deportees from Germany. According Alazas Miko, the Communication Officer of IOM in The Gambia, his organization is not aware “We are not aware of any charter flights soon.” Said Mr. Miko “In 2016, over 12,000 Gambians trying to reach Italy were rescued at sea. This number discounts thousands more whose journeys ended on the African continent or who perished in the Mediterranean. In 2016, over 180,000 people reached Italy through the Mediterranean Sea, many of whom were from West and Central Africa.” IOM website