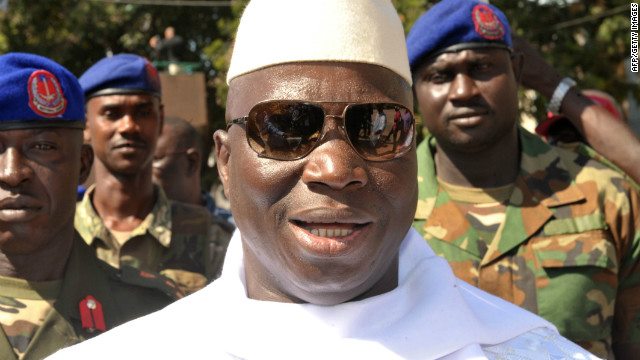 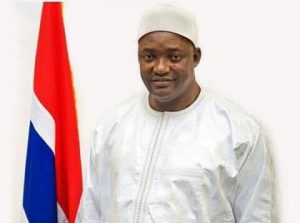 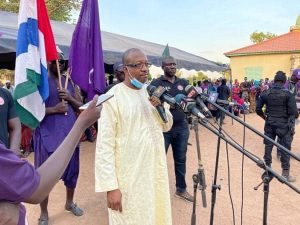 In a meeting held in Sareh Ngai village, Wuli- West on Tuesday, November 16th, His Excellency President Adama Barrow warns The leader of Gambia Demoratic Congress (GDC) Mama kandeh to stop giving former President Yaya Jammeh a platform to participate in the country’s political activities as his statements are a recipe for violence, “we did not give him permission to participate in the country’s politics where he is now. So if you are giving him the platform to instigate violence, I am warning you since you are the party leader. I’m warning you seriously” I will notify IEC to warn you Mama Kandeh. ” Said the president. 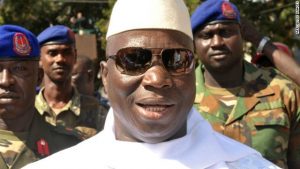 He further described Mama Kandeh as a desperate person who will do everything for votes “No matter how desperately you need people, you should know what to do. We know he is desperate and will do anything but be careful Mama Kandeh. Otherwise you will know that this country has laws and nobody is above these laws. Even me the president, I’m governed by these laws”
The president highlights that because he is also governed by law, that’s why he did not come with any governors or government vehicle on his campaign.
“Even the other NPP members who accompany me on the tour all came with private vehicles. That never happened during former president jammeh’s time.” Echoed the NPP Leader.
Barrow emphasizes that he is a peaceful leader and that folks should not take that for granted. ” I’m a peaceful president, I talk peace, I want peace for this country and peace will remain in the country. So for that being the case, let us respect the Law, if I the president respect the Law, I see no reason why Mama Kandeh will have powers to violate the law, the law will take its course.” Barrow frowned
Finally, Barrow warned Kandeh to desist from giving Yaya Jammeh a platform to instigate violence. According to him, even though it’s campaign period, the law is still in place. ” Even though we are in a campaign period, the law is still in place, so stop what you are doing or anything you see you cause it yourself “. Barrow warned
Share
Facebook
Twitter
Pinterest
WhatsApp
Previous articleEXECUTIVE DIRECTOR OF UNITY VISITS THE WASHINGTON WEST AFRICAN CENTER
Next article“Immunity is Not An Option”, Said By Senegalese Renowned Lawyer And Advisor To The Prosecutor of International Criminal Court, Adama Dieng.
- Advertisement -