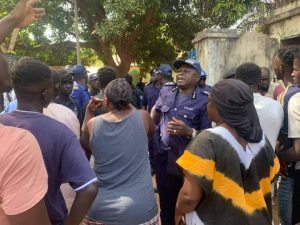 A taxi who was announced missing over the social media has been found dead at Salaji. The deceased goes by the name Omar Sonko.

The matter was first reported to the police who were investigating. A week later, the police found the dead body of the man. The driver was called Omar Sonko. On hearing the news, youths of Bakau began coming out in their numbers to the police station demanding a swift investigation into the mysterious demise of the late driver. Personnel of the police intervention unit (PIU) had to be deployed who released teargas to disperse the crowd, but the people were throwing stones at them. 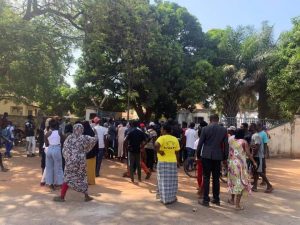 About 30 minutes later, the police issued a communication that they have arrested a man suspected of the murder. “Following investigations into an incident of a reported missing man of Bakau, whose corpse was found in Salaji, the police have arrested and detained a suspected 46-year-old Banjulian Man of Brusubi resident. The suspect is currently helping the Police with their investigation. While the police continue to probe into this incident, the general public is urged to exercise calm and restraint and avoid any unlawful activity,” the release stated. The paramilitary personnel succeeded in restoring calm in Bakau as they promised to ensure justice is serve in the matter.